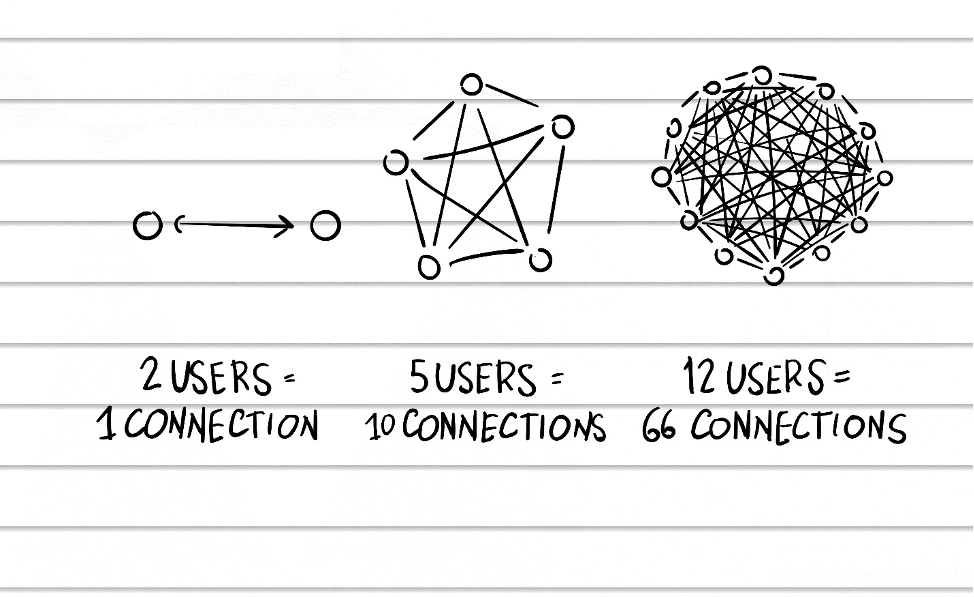 I want to shout it from the rooftops: ALL BLOCKCHAINS HAVE NETWORK EFFECTS!

People are pouring money into the blockchain market again, but they’re forgetting this one simple rule: the more people that use a blockchain, the more useful that blockchain becomes.

Today I’ll show you how to avoid their mistake – and a simple principle for investing in this new Gold Rush.

Network effects mean that every time someone joins the network, the network becomes more valuable for everyone. (Think the telephone, the Internet, or Facebook.)

For this reason, networks that are healthy and growing are usually good investments.

This is true in traditional stock investing, as well as blockchain investing. For example, here are two charts showing active users on Facebook vs. the market cap (or total value) of FB stock:

Over the long term, as Facebook continues to add new users, its stock price continues to grow. Compare that with Twitter:

Despite how much you may hear about Twitter, their growth has been relatively flat, and their stock price shows it. Now compare this with Snapchat:

It’s been a roller coaster ride for SNAP shareholders, but eventually more users generally mean a higher stock price. (Note this is over the long-term: even while Snapchat grew users in the first year after the IPO, their stock price cratered.)

So consider it a rule of thumb: networks that are healthy and growing are generally good long-term investments.

This is crazy relevant in the world of blockchain, where people are currently throwing gobs of money into the new ecosystem known as Decentralized Finance (or DeFi):

In these topsy-turvy markets, it’s easy to let greed get the best of us.

If we step back and simply ask ourselves, “Who is building valuable networks that are healthy and growing?” we can make much better decisions on where to invest in DeFi.

The key question: who is building valuable blockchain networks that are healthy and growing?

2) Time matters. Social media networks have been around for years; this new space has been around for months. It’s like watching a baby going through a growth spurt and trying to predict whether he’ll be a basketball star.

Still, if DeFi can keep up this growth, investing in the tokens behind these projects could be like investing in FB stock in 2012. As Facebook users grew, so did the usefulness of the Facebook network – and the money soon followed.

Say it with me: BLOCKCHAINS HAVE NETWORK EFFECTS.

DeFi Growth by the Numbers

Note that Y-axis on the left. Keep perspective on the total number of users for a DeFi project, not just the hockey-stick growth curve on the right. Uniswap has about a quarter of a million users, which (refer to the chart above) is roughly half the total number of users on DeFi. It’s tiny compared to Facebook, but within this niche, it’s enormous.

To invest in Uniswap, simply buy the UNI token.

This goes for any DeFi project that’s worth an investment. In a nutshell:

For example, here’s the number of users growing on the open-source money market protocol Aave:

Here’s the number of users growing on the interest rate protocol Compound:

Here’s the number of users on the liquidity protocol REN:

FULL DISCLOSURE: I bought all these tokens this week. Why? NETWORK EFFECTS.

Invest in Things vs. Investing in Value

Would you rather invest in a top-of-the-line Tesla, or the company that makes Teslas?

Would you rather put money into a DeFi account, or invest in the company that’s producing the accounts?

When we see more people using these DeFi protocols, those networks are growing. And networks that are healthy and growing are generally good investments.

Also remember: investing in DeFi is still extremely risky. Do not invest more than you are willing to lose 100%! If you’re following our Blockchain Believers Portfolio, the easy way is just to Uniswap a little of your Ethereum into these new tokens – but no more than you’re willing to lose.

But the absolute simplest way of investing in DeFi is simply to buy and hold Ethereum. All this stuff is built on Ethereum, making it possibly the most valuable asset of all. Here’s the number of active users of Ethereum:

If you believe the network is healthy and growing, then shout it from the rooftops with me: NETWORK EFFECTS!

John Hargrave is a founding member of the Boston Blockchain Association, and the co-author of Blockchain Success Stories: Case Studies from the Leading Edge of Business.